QSO Absorption Line Research at the University of Pittsburgh

We study the evolution of galaxies as traced by their absorption signatures in the spectra of background QSOs.

Quasi-stellar objects, or QSOs, are among the most luminous and distant objects in the Universe. While the QSO phenomenon is interesting in its own right, the field of QSO absorption line research takes advantage of the QSO's extreme luminosity and distance to study the intervening Universe. The QSO is used as a background light bulb. As its light traverses the vast expanse of the Universe before reaching us, it encounters a variety of objects ranging from primordial gas clouds to galaxies and clusters of galaxies. These interlopers leave behind absorption signatures in the spectrum of the QSO ( Figure 1 below; courtesy John Webb). 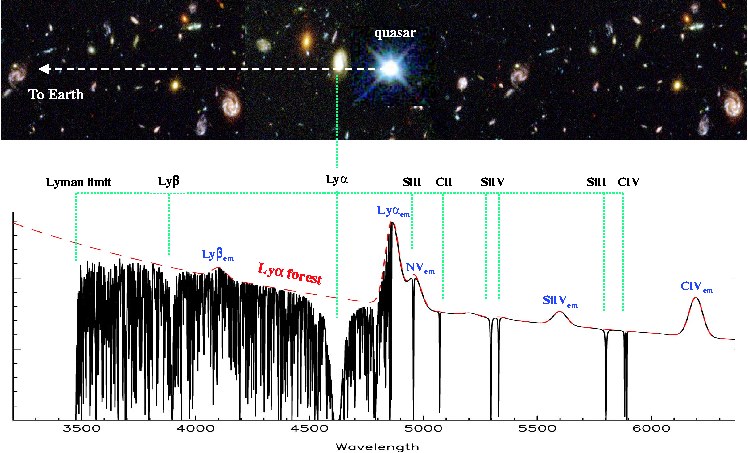 Two very simple and fundamental properties of our Universe permit us to investigate its evolutionary history. First, the finite speed of light ensures that objects that are farther away are observed at an earlier epoch, and hence at an earlier stage of evolution than nearby objects. Second, an expanding universe simplifies the observational problem of estimating how much farther away they are. In an expanding Universe the fabric of space at every point expands, and consequently, objects that are farther away recede faster. This velocity-distance relation was first discovered using observational data by Edwin Hubble in 1929, and the constant of proportionality is now referred to as the Hubble constant. Higher recession velocities manifest themselves as larger wavelength shifts in the objects' spectra, and these redshifts are easily observed.

QSO spectra reveal the presence of intervening gaseous clouds, redshifted by varying amounts depending on the redshift of the absorber, all way up to the redshift of the QSO. With the recent discovery of a redshift z=6.4 QSO in the Sloan Digital Sky Survey, we can now study the intervening Universe back to a time when it was about 5% of its present age. By studying the properties of intervening absorption-line systems we can answer fundamental questions about the formation and evolution of gaseous structures in the Universe.

Intervening gas clouds are found to have neutral hydrogen column densities in the range 1E12 < N(HI) < 8E21 atoms/cm^2. Damped Lyman alpha (DLA) absorption lines have the highest column densities with N(HI) > 2E20 atoms/cm^2. They are also the rarest lines in the Lyman alpha forest. The weakest lines with N(HI) ~ 1E12 atoms/cm^2 are 12 orders of magnitude more numerous than the DLA lines, but the DLA systems contain over 90% of the observable neutral hydrogen mass in the Universe. Since galaxy evolution is the net result of conversion of gas into stars, studying the evolution of the DLA systems reveals fundamental information about the evolution of the Universe. (Rao's review on DLA surveys can be found here.) The hydrogen Lyman alpha line falls in the ultraviolet region of the electromagnetic spectrum for redshifts z < 1.65. Consequently, space based observatories, like the Hubble Space Telescope, are required to discover them in QSO spectra. Since this redshift interval covers the most recent ~70% of the age of the Universe, it is particularly important that low-redshift examples of DLA systems be discovered and studied so that evolutionary links between the high-redshift DLA absorbers found in optical surveys and nearby galaxies can be studied.

Our research is geared towards studying the low-redshift DLA population. Our HST observations have increased the number of known low-redshift DLA absorbers more than three-fold. We have been studying the properties of the newly-discovered systems with the Chandra X-ray observatory as well as several ground-based observatories. Telescopes such as the WIYN, the 4m, and the MDM on Kitt Peak in Arizona, as well as the IRTF on Mauna Kea in Hawaii, the NTT in Chile, and the WHT in La Palma are being used to study the properties of the newly-discovered low-redshift DLA systems.

Through our HST surveys, we have shown that strong MgII absorbers track the neutral gas in the Universe; thus one of our major goals is to accurately characterize their redshift evolution and properties. The University of Pittsburgh's collaboration in the SDSS has facilitated our research by providing us access to over 40,000 QSO spectra. We have now been able to identify approximately 18,000 MgII systems in the redshift interval 0.37 < z < 2.2, and have pushed to even lower redshifts (z ~ 0.15) by performing a survey of ~400 QSOs with the Multiple Mirror Telescope (MMT). These have provided us with numerous opportunities for follow-up studies, both individually to study unusual systems and their galaxy properties as well as statistically through high signal-to-noise image stacking or spectroscopic composites. Optical and IR imaging allow us to study the luminosity and colors of the absorbing galaxies, while spectroscopy provides information on neutral-gas-phase element abundances, dust content (through reddening and depletion measurements), and gas kinematics.

Publications describing results from this work can be found here .